“It’s turkey time – gobble, gobble”. No, we’re not talking about your Christmas dinner here. These words were immortalised by J.Lo in Gigli, a film that is commonly known – somewhat poetically – as one of the biggest cinematic turkeys of all time.

That crown, from what the blogosphere tells me, has now been snatched by Lindsay Lohan’s latest effort Liz & Dick. I’m set to watch this tele-movie treat for my birthday on Boxing Day so, in anticipation, I’ve revived my countdown of fat, juicy, camp as Christmas turkeys, originally published for GaydarRadio.com back in 2010. Where will the lovely Lilo fit when I’ve seen her car-crash (pun-intended) of a film? Watch this space!

Gigli
It’s difficult enough to pronounce the title of this movie, let alone actually watch it. Ben Affleck stars as a hitman with a heart of gold hired to kidnap a Baywatch-obsessed disabled man. Jennifer Lopez plays a lesbian, but it turns out that she is the type of lesbian Hollywood dreams are made of – she sleeps with men and talks dirty, using turkey analogies to do so, it seems. 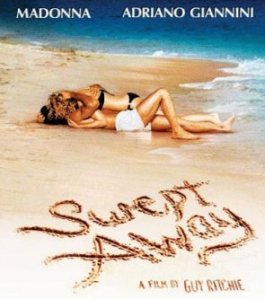 Swept Away
I know all the words to the songs in Evita and I own a copy of Who’s That Girl. To put it another way, I’m not some fair-weather Madonna fan who claims to love her when ‘Give it 2 Me’ comes out only to disown her when ‘Celebration’ comes along. But I can’t argue with, well, pretty much everyone when they say Swept Away is a steaming hot pile of… turkey.

Madonna plays Amber, a Material Biatch on a cruise with her husband, but Goldie Hawn in Overboard she ain’t. Madge finds herself marooned on a desert island with Guiseppe, the cabin boy she treated like garbage, or her brother Christopher Ciccone if you believe his autobiography. What follows is a near-rape scene, some truly atrocious acting from Madonna and Guy Ritchie’s career being swept away much like Amber and Guiseppe. This is almost as bad as Madonna’s big screen effort with her first ex-husband, which conveniently brings us to…

Shanghai Surprise
Sean Penn stars as an Indiana Jones-type fortune hunter looking for a fast track out of China, while Madonna is a virginal missionary nurse seeking the curing powers of opium for her patients. Don’t laugh – this movie actually got made, which is perhaps the biggest “suprise” of them all.

Glitter
In an episode of Will & Grace, Jack McFarland is forced to wear an eye patch due to what he calls “a glitter injury – the worst glitter-related disaster since Mariah Carey’s film debut”. Says it all, really. For her efforts playing Billie Frank, an aspiring singer on the 80s club scene, Mariah won Worst Actress at that year’s Golden Rasperry Awards – ie. the anti-Oscars – and the film’s legacy as a pop culture punch line lives on. One of my favourite examples is a Buffy episode, in which bad girl slayer Faith explains how prison couldn’t get any worse because they screen Glitter to inmates.

Showgirls
With nudity, lezzer action and a plot involving a psychotic woman’s ambition to climb the seedy hierarchy from stripper to showgirl, this is a camp classic if ever there was one. Elizabeth Berkeley is a lap dancer who dreams of being the star of a “classy” nude review at the Stardust casino. Gina Gershon stands in her way. This All About Eve remake was so bad, even Striptease, the blight on Demi Moore’s CV, had to be distanced from it in advertisements.

I Know Who Killed Me
Ever since the delicious Mean Girls, the gays have had a soft spot for Lindsay Lohan. She’s provided us with hours of entertainment in the tabloids and on YouTube – who could forget that face she pulled when she was sentenced to jail? I must have hit rewind at least five times – plus, she was a lesbian for a good one to two years. But I Know Who Killed Me is a car-crash in a different way to general LiLo-based entertainment – you actually want to look away.

This movie gives you double LiLo. LiLo 1 is a virginal geek – you can tell because she wears glasses – while LiLo 2 is a promiscuous pole dancer who doesn’t wear glasses. They’re twins separated at birth but they hold a powerful psychic connection. Then, believe it or not, add some stigmata and severed limbs to the plot. Come to think of it, with the exception of Se7en, amputation seems to spell cinematic disaster – we’re talking about you Boxing Helena. We couldn’t let a list of turkeys go by without mentioning you.

Catwoman
A smoking hot Oscar winner in a catsuit and Sharon Stone as her nemesis has to be a recipe for success, right? Oh so wrong. Good sport Halle Berry actually accepted her Razzie Award for Worst Actress personally, saying, “I want to thank Warner Brothers. Thank you for putting me in a piece of shit, God-awful movie”.

Halle is Patience, a woman murdered by a cosmetics company after she works out that their face cream is turning people into monsters. Okaaay. She is resurrected by an Egyptian house cat and given feline super powers, which she uses to exact revenge on her killers, but not before a scene in which she seductively rubs catnip all over her face. This film makes us want to hiss – as in, hiss and boo at it.

Batman & Robin
Which brings us to another superhero stinker. George Clooney is effectively the George Lazenby of the Batman series here, a fact he was probably well aware of when he commented, “We might have killed the franchise”. The homoeroticism between George and Chris O’Donnell as Robin, not to mention the big rubber Batnipples and cod-pieces, were universally ridiculed, but you know what they say – another man’s trash…

Battlefield Earth
Speaking of camp costumes, John Travolta is a dreadlocked alien in this big-budget turkey adapted from a novel by L. Ron Hubbard, the founder of Scientology. One critic described it as “the Showgirls of sci-fi shoot-‘em-ups”. ‘Nuff said.

Sex and the City 2
Fighting off stiff competition from the likes of Piranha 3D and The Last Airbender, Sex and the City 2 is my pick for the biggest turkey of 2010. Watching this is like catching up with your smart, sassy, beloved best girlfriend after she’s had a lobotomy. Basically, it’s back to Feminism 101 for a series that once led the way when it came to dealing with complex issues of modern-day feminism. Now the formerly fab four swan around what’s made to look like Abu Dhabi gawping at women in Burkas and singing a karaoke version of ‘I Am Woman’. Not even Liza or an entire Aussie sports team stripping down to their speedos can save it. Click here to read my review.