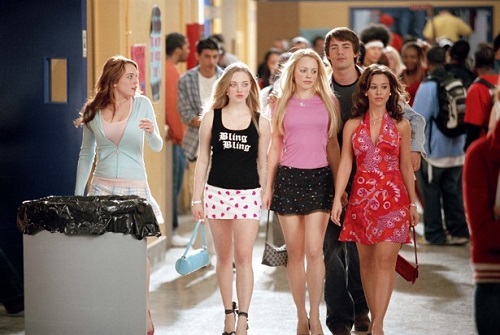 Mean Girls certainly wasn’t the first movie to put a girl clique at the front and centre of the action, but it was the first (unless you count Heathers) to blatantly shine a spotlight on the politics and psychological tactics needed to keep a girl clique up and running – think intimidation, bitchy three-way phone conversations, keeping secrets, burn books and rigid rules around dress and behaviour. That’s because Tina Fey’s screenplay was based on Rosalind Wiseman’s self-help book Queen Bees and Wannabes. The result was comedy gold that often cut a little too close to the bone.

Hierarchy: Janis’ observation that “evil takes a human form in Regina George” wasn’t far off the mark when she described the school’s resident queen bee and if Mean Girls was Game of Thrones, Gretchen Wieners would totally be the hand of the queen. In fact, when there was disturbance in the realm with Regina’s “army of skanks”, Gretchen used another old world battle analogy to vent her frustration: “Why should Caesar get to stomp around like a giant while the rest of us try not to get smushed under his big feet? What’s so great about Caesar? Brutus is just as cute as Caesar. OK, Brutus is just as smart as Caesar. People totally like Brutus just as much as they like Caesar. And when did it become OK for one person to be the boss of everybody, huh? Because that’s not what Rome is about! We should totally just stab Caesar!” Karen Smith would be, like, the queen’s servant girl, or something.

Dress Code: The Plastics wore pink on Wednesdays, they couldn’t wear sweatpants on a Monday and let’s not forget how Gretchen was forbidden from wearing gold hoops. Offences were punishable with banishment from their lunch table.

Hierarchy: Before Regina George ruled high school with a mix of intimidation and manipulation, there was Heather Chandler, a vicious ruler who showed no mercy. Heather Duke literally bent over for Heather when she acted as a surface for Veronica to forge the infamous love note to Martha Dunnstock, while a suicidal Heather McNamara called late night radio hotlines to talk about her problems. Basically, someone had to die before you could move up the food chain, with Heather Duke finally managing to usurp Heather #1 after she drinks a cup of drain cleaner and smashes through a glass coffee table.

Dress Code: Heather Duke’s new role as clique leader is made clear when she begins wearing a red scrunchie that belonged to Heather Chandler. She also marches into Veronica Sawyer’s backyard and announces, “I’m red”. You see, red is worn by the clique leader, followed by green, yellow and blue. When it comes to blazers, stockings and ballet flats, all the primary colours were represented.

Hierarchy: The Pink Ladies were more a bunch of loveable misfits than mean girls in a distinct pecking order. They did, however, have a queen bee who “ruuuled the schoool”, and that was Rizzo – and she was an interesting one at that, a tough chick with a vulnerable side that ultimately made her likeable.

Dress Code: While the inner politics of the Pink Ladies weren’t that rigid, the dress code was. Before the Plastics wore pink on Wednesdays, the Pink Ladies wore their pink jackets every day. Their descendants in Grease 2 even philosophised about their allegiance to the colour pink and what it signified in a musical number: “The Pink Ladies pledge to act cool, to look cool and to be cool. ‘Til death do us part, think pink!”

Hierarchy: So what was this Aussie clique all about? Let’s let Nicole and Janine fill us in, shall we? “People invite us to parties because they know we have a good time. We’re mad”, Nicole explains to Muriel. “Party, party, party”, adds Janine. They listen to Baby Animals and Nirvana. Muriel embarrasses them because she’s “fat”, she listens to ‘70s music and, well, she’s Muriel. But who was the ringleader of this delightful group? It’s Tania (a tizzied up Sophie Lee) who explains to Muriel, “You’ve got to find friends on your own level. Like I found Chook. He’s up on my level. Marrying him was the happiest day of my life”. These girls are basically who Kath & Kim’s Kimberly Craig née Day would aspire to be if she had gone to high school in Porpoise Spit and not Fountain Lakes.

They’re not all bad, though. They at least let Muriel finish her Orgasm (that’s a cocktail) before they kicked her out of their group.

Dress Code: Pink lipstick and a coconut bra for performing a dance to ‘The Tide is High’ with them.

Hierarchy: The hierarchy here wasn’t as clear as you may think. In theory, Kelly was queen bee – she won the title of Spring Queen and she was voted ‘Most Beautiful’ in the yearbook – but it’s arguably Brenda who was the queen bee in practice.  Here’s a snippet from what would be in the Beverly Hills 90210 quote hall of fame if there was one:

Kelly: Dylan McKay, that’s all we ever talk about! Did it ever occur to you that other people have relationships that they take seriously!?
Brenda: How can you even compare your problems with Jake who you barely even know to my problems with Dylan? I mean, you’re not even up there with Donna and David!
Donna: What’s that supposed to mean?
Kelly: That means that Brenda’s being a self-centered little bitch!

Call me perverse, but my favourite episodes of Beverly Hills 90210 always involved the times when Kelly and Brenda fell out. Fact: Brenda and Kelly weren’t really friends; they were frenemies. Anyway, Donna was clearly the third in command, but the crown she did hold was that of fashion queen, as is sometimes the case with the third in command in the girl clique hierarchy – see what I have to say about one of the girls in Can’t Buy Me Love, number eight in this countdown. Maybe these #3 girls used clothes to express themselves because it’s not like they could express their individuality another way. Wow, that’s deep.

Hierarchy: These girls – except Amy, who was more of a geek before Sweet Valley High – started their clique early, in sixth grade as The Unicorns in Sweet Valley Twins. They wore something purple every day to school and groomed themselves for the 16 year-old bitches they were to become, disgusted by anyone who wasn’t a size six or who did well in class. As for the pecking order, you may think the queen bee was Jessica, since the series was all about her and Elizabeth, but I’m going to go with Lila Fowler. This scheming rich bitch was basically Sweet Valley’s answer to Cruel Intentions’ Katherine Merteuil, while Bruce Patman was the equivalent to Sebastian Valmont.

Dress Code: Anything from Lisette’s.

Hierarchy: If I was going to be under the rule of any fictional high school clique, I’d choose to be under the reign of Cher Horowitz. She was a benevolent and thoughtful queen bee, which probably led to her temporary downfall when Tai became a California version Frankenstein’s Monster.

Hierarchy: Queen bee Cindy Mancini was given depth as far as ‘80s teen movies go. She wrote poetry about a sea of deep blue and being together as two, and wanted to be taken seriously, you see. She achieved that by falling for the geek she madeover and not caring who knew about it – but only at the very end of the film. Second in command was the big haired Tina Caspary as Barbara, and third in command was fashionista Patty (Darcy DeMoss), who could give Donna Martin a run for her money in terms of amazing outfits. This girl wore fingerless gloves to the school dance and a red and yellow lightning bolt on her cheek to school.

Dress code: Big hair, sequins and a white suede outfit – just be careful not to spill any red wine on it.

9. Nancy, Bonnie and Rochelle – The Craft

Hierarchy: This clique stands out in the countdown because it is the only one at the bottom of the high school social hierarchy, rather than the top. These outcasts bonded over the fact that they were witches, but their fearless – and, let’s face it, scary – leader was Fairuza Balk as the wild-eyed, scratchy-voiced and sneering Nancy. This girl could spar with Heather Chandler and Regina George and probably win but, like those two, her fate wasn’t so good. She ended up in a mental hospital. She was still wicked cool, though.

Hierarchy: Queen bee Randa was pretty much devoid of personality and didn’t hold a candle to Heather #1, Regina George, Rizzo or Nancy from The Craft. She was a mildly bitchy blonde and that’s about it, so you’re probably wondering why this clique makes the list, huh? Well, it’s because of her two sidekicks Kiki and Shawn (Tina Caspary rears her big-haired head again). These two treat us to a locker room dance number that sums up what their clique stands for – it’s called ‘I Like Boys’. Yay for the sisterhood!

Hall of Fame
The top contenders for the Hall of Fame are Shannen Doherty and Tina Caspary, who both hold the distinction of being in two of the girl cliques described above. But the winner is Shannen Doherty, who takes the crown mainly for the line in Heathers, “Veronica, why are you pulling my dick?” And let’s not forget her amazing reply to Veronica’s question, “Why are you such a mega-bitch?” It’s…drum roll please… “because I can be”.

One thought on ““On Wednesdays We Wear Pink”: The Best Girl Cliques of Pop Culture”